Democracy is a government in which the supreme power is vested in the people and exercised by them directly or indirectly through a system of representation usually involving periodically held free elections. The five (5) basic concepts are

Fundamental worth of every person, everyone is worthy of being part of democracy; equality of all persons: everyone has equal opportunity and legal equality, regardless of gender, religion, or race; Majority rule and Minority Rights; Necessity of compromise and Individual Freedom.

Democracy is important because it gives citizens equal opportunities to help make laws, vote for leaders and be protected by laws and rights that are in place. It focuses on the rights of the citizens rather than the rights that the government has to control the citizens. Good governance is an approach to government that is committed to creating a system founded in justice and peace that protects human rights and civil liberties. It requires that all groups, particularly those most vulnerable, have direct or representative access to the systems of governance.

The above understanding of democracy and good governance are not all obtainable in Anambra State. Our democratization and democratic processes are still bedeviled with lots of problems that include beneficial to a specialized few and their cronies, limited responsiveness and representation, weak opposition party, money politics, structural exclusion of women and youths. The causes of the above stated problems relate to ignorant understanding of democratic government by the electorates and elected, inability of citizens to exercise their rights and ask questions on issues pertaining good governance, lack of internal democracy amongst political parties, poor knowledge of the electoral and democratic process and limited capacity for advocacy. In as much as the problem affects all the citizens of the state, the people mostly affected are the poor, the marginalized and the vulnerable especially females, youths and children. 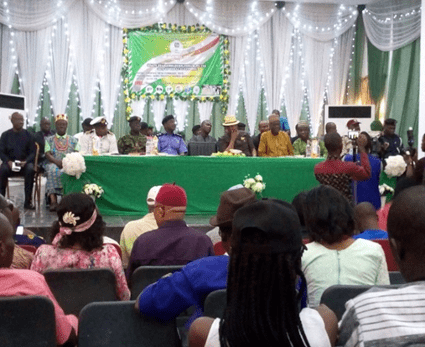 It has been observed that among all the parties in the state, there is no internal democracy. Imposition of unqualified candidates is often the order of the day. This scenario leads to rigging, thuggery and other manipulations and illegalities associated with elections, including unnecessary appointment of large number of aides.

During elections politicians are active in political engagement – electioneering and campaign. After election they become unreachable, thus this brings about poor representation and lack of provision of democracy dividend – poor infrastructure such as bad roads, unreliable power supply, poor health facilities, etc.

The hegemonic politics of powerful groups such as businessmen/Contractors and Religious leaders have become the main factors driving the politics of the state.

The above political upheavals resulted to a great voter apathy in the State. During elections, most voters prefer to stay indoors, others demand and receive N1000 to N2000 each in other to vote for a candidate. In previous elections, the National Orientation Agency and federal ministry of information launched various campaigns against this. The government also put laws in place to discourage this, but without success. This leads unpopular candidates with money and those with billionaire God fathers to win elections in the State.

JDPC Onitsha in association with several other donors like CRS, USAID, UK AID, SAVI, CPC, and Development In Practice (DiP), Caritas Nigeria, JDPC Awka and JDPC Nnewi, through V2P project and other projects sensitized the voting public in the State on the need to vote and not sell their votes. They also monitored the elections in the state as official observers which was a success.